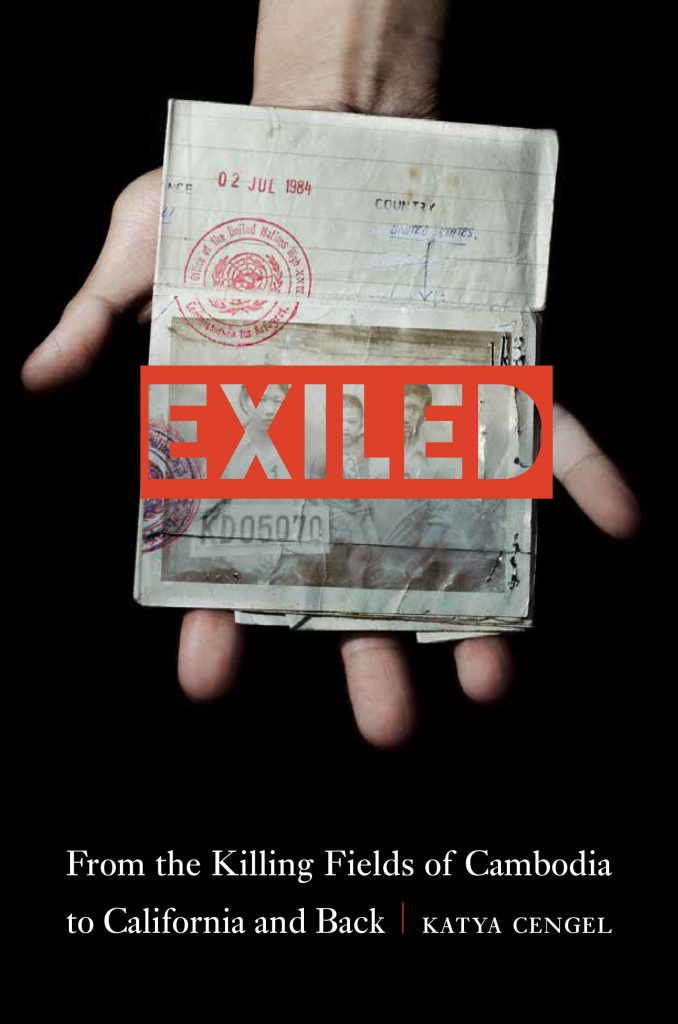 San Tran Croucher’s earliest memories are of fleeing ethnic attacks in her Vietnamese village, only to be later tortured in Cambodia by the Khmer Rouge.

Katya Cengel met San when San was seventy-five years old and living in California, having miraculously survived the Cambodian genocide with her three daughters, Sithy, Sithea, and Jennifer. But San’s family’s troubles didn’t end after their resettlement in California. As a teenager under the Khmer Rouge, San’s daughter Sithy had been the family’s savior, the strong one who learned how to steal food to keep them alive. In the United States, Sithy’s survival skills were best suited for a life of crime, and she was eventually jailed for drug possession. U.S. immigration law enforces deportation of any immigrant or refugee who is found guilty of certain illegal activities, and San has hired a lawyer to fight Sithy’s deportation case. Only time will tell if they are successful.

In Exiled Cengel follows the stories of four Cambodian families, including San’s, as they confront criminal deportation forty years after their resettlement in the United States. Weaving together these stories into a single narrative, Cengel finds that violence comes in many forms and that trauma is passed down through generations. With no easy answers, Cengel reveals a cycle of violence, followed by safety, and then loss.

“In Exiled, Katya Cengel presents in unsparing detail the lives of four Cambodian families facing the deportation of loved ones. At the center of the story is San, a woman in her 70s, and her daughter Sithy, who, after being jailed for drug possession, confronts—with a mixture of trepidation, pragmatism, delusion, and humor—the prospect of being forcibly removed from the American life she has made. Cengel’s book focuses entirely on the experiences of the Cambodian-American community, but it speaks more broadly to the current debate over the wider immigration crisis.”—Martin de Bourmont, Foreign Policy

“A timely examination of the issue of deportation of Cambodian refugees forty years after their resettlement in the United States. . . . Cengel’s book shows there are no easy answers as families say goodbye to their sons, daughters, mothers, and fathers who are forced to return to a Cambodia that some of them never knew or that others hoped never to see again.”—John Schidlovsky, Rumpus

“In Exiled, Katya Cengel tracks the lives of four families, several members of whom, decades after their arrival in the U.S., face the threat of another wrenching rupture: deportation. . . . Bouncing between the killing fields of 1970s Cambodia and present-day America, Cengel powerfully evokes how the aftershocks of trauma can span continents, nations, and generations.”—Peter C. Baker, Pacific Standard

“A powerful and timely book on the generational impact of a particularly brutal chapter of the twentieth century—the Cambodian genocide of the 1970s. Exiled moves seamlessly from the killing fields of Cambodia to American immigrant communities, adding texture and perspective to the current debate on refugees, political asylum, cultural assimilation, and the deportation of Americanized immigrant criminals. Cengel humanizes this debate, bringing a deeper understanding of these hot-button issues. I strongly recommend this book.”—Melvin Claxton, Pulitzer Prize–winning journalist

“Exiled comes at the right moment in our national debate about immigration and deportation. Katya Cengel’s painfully detailed story about the maltreatment of the children of refugees we once welcomed should open our minds and hearts to the tyranny of ill-conceived laws and small-minded bureaucrats.”—Elizabeth Becker, author of When the War Was Over: Cambodia and the Khmer Rouge Revolution

“An excellent and compelling account of Cambodian refugees’ plight in the United States. . . . Once you read Exiled, you can’t help but be empathetic and look at deportation through a new lens.”—Jennifer Lau, author of Beautiful Hero: How We Survived the Khmer Rouge

“A multigenerational saga of violence and resurrection that plays out among several Cambodian-American families. . . . Katya Cengel movingly documents how trauma plays out across multiple generations, showing how the unresolved conflicts of the elders lead to catastrophic addiction and mental illness among the young. Cengel captures the full scale of this tragedy and writes with such compassion that anybody who picks up this book cannot fail to be moved.”—Helen Thorpe, author of The Newcomers: Finding Refuge, Friendship, and Hope in an American Classroom