The Congresswoman Who Survived and Served 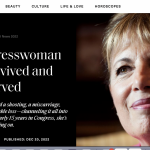 Of Murder and Motherhood 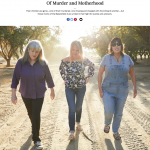 Their children are gone—two of them murdered, one missing and charged with the killing of another—but these moms of the Bakersfield 3 are united in their fight for justice and answers….read more

The 20th Century History Behind Russia’s Invasion of Ukraine 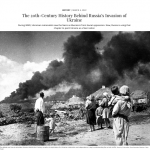 Included in a Flipboard curated collection

During WWII, Ukrainian nationalists saw the Nazis as liberators from Soviet oppression. Now, Russia is using that chapter to paint Ukraine as a Nazi nation…read more

Inside the Global Cult of Al Capone 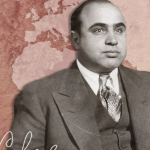 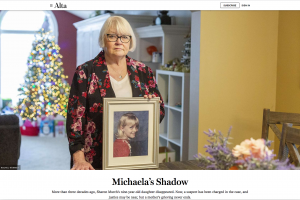 A Sensational Murder Case That Ended in a Wrongful Conviction

It seemed New York City had its own Jack the Ripper. In April 1891, the mutilated body of Carrie Brown, a former self-styled actor, turned up in what the New York Times called a “squalid” lodging house of “unsavory reputation.” The fame that eluded her in life found her now, with the newspapers eagerly serving up lurid details, factual or not. Brown supposedly once recited a scene from Romeo and Juliet atop a saloon table. Her penchant for quoting the bard, coupled with her age—she was 60—earned her the nickname “Old Shakespeare.” …read more

From Kyiv to Kentucky 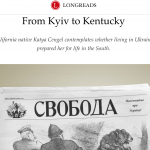 I punched a series of numbers into a cordless phone, waited for a prompt and then punched a dozen or so more. Before Skype there was PennyTalk. The phone card saved you money, not time, requiring the input of a long account number, followed by an equally long password, and a no less extensive foreign phone number. At present I was using the cumbersome process to my advantage, trying to figure out how I would break the news to my Ukrainian fiancé that he would be joining me not in California, but in Kentucky.…read more

The Man Without A Name 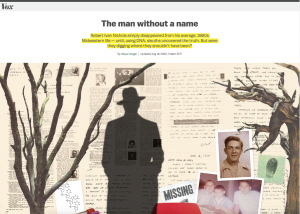 Robert Ivan Nichols simply disappeared from his average, 1960s Midwestern life — until, using DNA, sleuths uncovered the truth. But were they digging where they shouldn’t have been? …read more

His arms are covered with the sticky gunk left after bandages come off. There is a blue bruise on the inside of his right forearm. A long plastic tube enters a hole near his belly button. When it’s not in use, James “Bo” Calvert tucks the tube that he uses for dialysis into a spandex “bra” that circles his chest.

Calvert has stage 4 kidney disease, which means his kidney function is only 15 to 30 percent. There are six stages of chronic kidney disease — stage 4 is the last stage before end-stage renal disease (ESRD), when the kidneys cannot filter waste and excess fluid from the blood. At this point, you need a transplant or dialysis to stay alive.

Calvert has had both…read more

My Brother’s Killer is Now My Friend

Denise Taylor had just graduated from college when her brother Bo was murdered. For years she struggled to come to terms with the loss. Then she spent more than a decade trying to get her brother’s killer out of prison…read more

She Sleeps in the Front Seat, Her Son Takes the Back

Naomi Lender hits the trunk of her 2000 Ford Taurus with her fist. It pops up to reveal everything she and her teenaged son Amram will need in the next few days: an electric kettle—for something warm to drink in the morning—a water
filter, to purify the water they get from a hose, and bags of food and clothes. She takes a box of fish sticks from a cooler at her feet and heads across the parking lot of Jewish Family Service of San Diego to an outdoor patio
where a small group has gathered…read more

A Homecoming Racked With Guilt and Shame for Guatemalan Migrant Children

They arrive without shoelaces—Ana with her long hair, Juan with his nervous, darting eyes and Adan with his anger. Because they are children and are traveling alone, they are escorted from the airplane to a cordoned-off section
of the main building at the Guatemalan air force base at La Aurora international airport. The government psychologist assigned to watch over them tells them they are lucky: Their shoelaces were taken before they left the United
States, but at least they weren’t handcuffed…read more

A Soviet-Era Mind-Set at the Market

We were enjoying a late-morning cup of coffee in one of the outdoor cafes of Banska Bystrica, preparing to head home, when my mother suggested that we buy some berries. In Slovakia, strawberries are a summer treat, and my mother was
excited to buy them for my kids. I didn’t have the heart to tell her that in California, where I live, we eat berries year round…read more

On their third day on the job fighting the California Rim Fire, Alan Jackson and his team were near Groveland, a small town just outside Yosemite National Park in central California, cutting containment lines. “It was so smoky nobody could see nobody,” says Jackson. “You couldn’t see where you were driving…” read more

It takes the taxi driver three tries to find the neighborhood and at least another three wrong turns on narrow unpaved roads before he locates the company’s front gate. Each time he gets turned around the driver reaches for a cell phone. On the other end of the line Odgerel Gamsukh directs the driver to Gamsukh’s garage door business. Neither man seems bothered by the multiple interruptions and resulting delay. Mongolians are used to it taking a little extra time to get around, especially in the ger areas of Ulaanbaatar…read more

Married Off in Mozambique

Olinda dropped out of school after giving birth to her first child. She was in the seventh grade. Like many girls in this village in southern Mozambique, she had hopes of becoming a teacher; now, she wishes the same for her daughter…read more